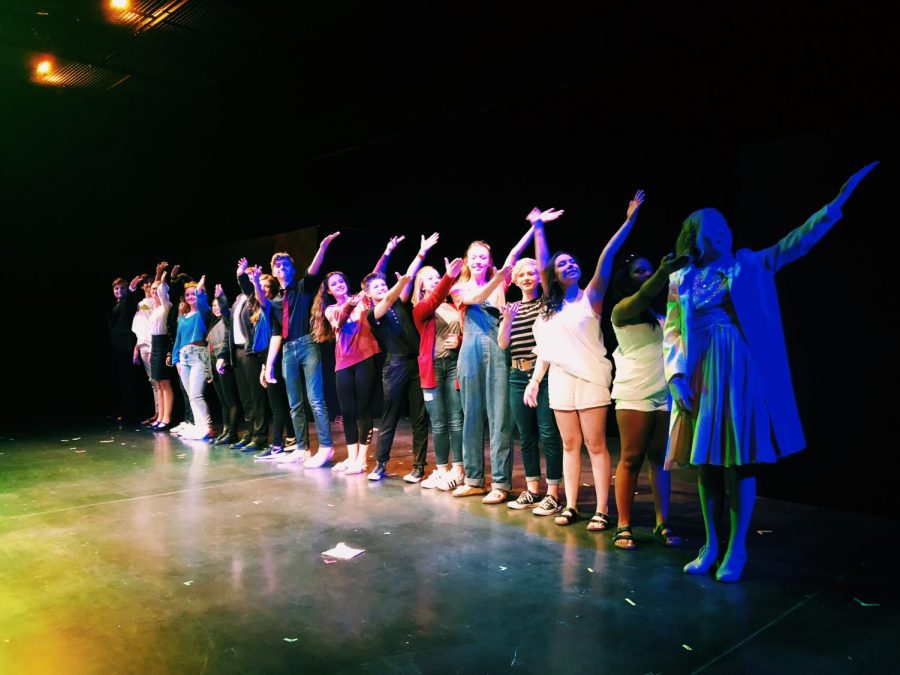 Cast of the New Works Festival lines up at the end of the show to take bows and point ovation to technical crew.

A series of student written and directed plays that made up The New Works Festival  was performed Friday and Saturday in the Flex Theatre. The New Works festival was designed by Alisha Morris, a Performing Arts teacher at West, and gave the students a chance to be leaders as well as the opportunity to not just act, but write and direct as well.

“We’re pretty much in charge of how they go,” sophomore actress Aqwilla Adams said. “Mrs. Morris supervises, but doesn’t get involved unless something is going wrong.”

“This year is more organized and we ended up doing more shows,” Gabriel Valencia said.

Valencia, a technical director, compared the festival to that of last year.

“Morris also decided that one of the plays could be broken down into small interludes between each play,” he said.

Those small interludes were similar to TV commercials. Between each play there were breaks for a fake product to be sold. This connected all the plays and brought them together into a single production.

Sophomore Summer Sperke, who has been heavily involved in theatre her high school career, was a technical director for a play called The Ghost Cellist, by Ella Powell. Sperke spoke about some of the challenges of being tech director.

“A major challenge was the time frame we had,” Sperke said. “It being only two weeks made it a lot more difficult to perfect our lights and sound cues, as well as the sets for each one.”

The last minuet shift plot Sperke was in charge of creating also brought some challenges as well.

“It’s like the big schedule on how and when the set pieces move and who moves them,” she said.

The Ghost Cellist featured a girl named Katherine, played by senior Grace Hawkins, who goes into an opera house and encounters statues that come alive as well as the ghost of her old friend Leo. Leo is a concert cellist and was played by freshman Jace Jaeckel.

Jaeckel heard about the New Works Festival through a friend, who told him there was a guaranteed spot in the show for a cellist. His character died in his early 20s, backstage before a show. His killer had shot him in the head in an attempt to get Katherine all to himself.

After auditioning, Jaeckel spent a good amount of time searching for the right piece of music to play throughout the show. He ended up choosing “Secrets” by OneRepublic.

“The song is named Secrets, and so many secrets have been kept from the characters in the play, especially Katherine, which is why I chose it in particular,” he said.

Other actors in The Ghost Cellist included Olivia Keiter, Brett Bowers, Brennan Frye, and Aqwilla Adams. It was directed by Kayla Tappan.

Technical director Lauren Karlin, who only recently got involved with the theatre program, talked about becoming a technical director for the play Dagger, written by freshman Brandon Heflin, and the challenges involved.

“I’ve learned a lot about lighting and how difficult it is to be in charge of all the technical stuff for a show,” Karlin said. “There were some people who had more experience, but Mrs. Morris always gives the underdog a fair chance.”

Other plays in the festival included Another One Bites the Dust, by Frye, The Interview, by Jack Krzykowski, and The Elevator Dilemma, by Tanner Bush.

Summer Sperke shared her overall thoughts looking back on the New Works Festival.

“With the two weeks we were limited to, I believe it went extremely well. All the directors and TD’s were level headed the whole time, and I believe the experience was just very enjoyable for everyone involved.”