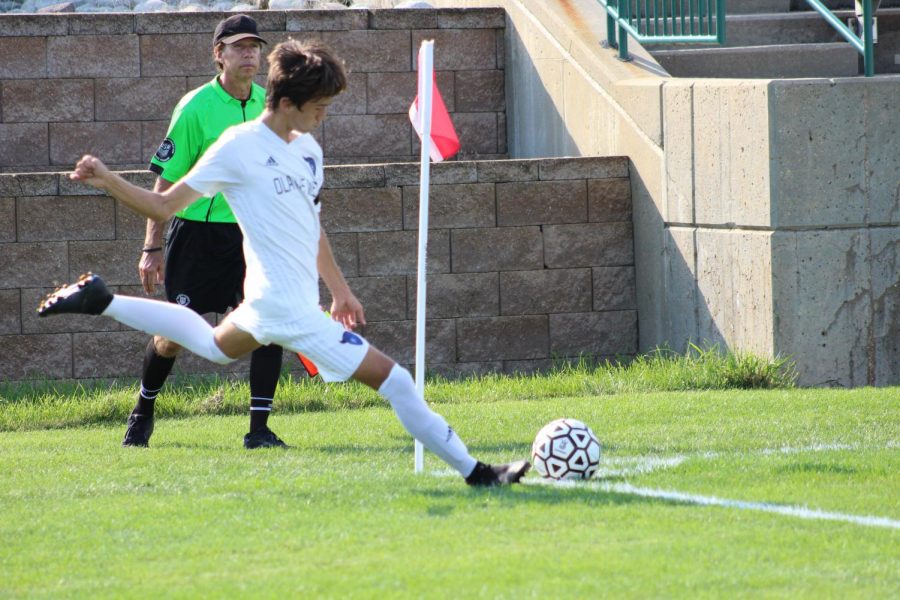 Senior Luke High kicks the ball back in during the remaining minutes of the game.

On Saturday, Sept. 7 the varsity boys soccer team competed at the annual Fat Cat Tournament. As their first tournament of the season, it was a chance to get back into the swing of the season. They lost to Blue Valley West, the hosts of the tournament, by a game of 2-2 decided by penalty kicks in overtime.

A few players share their thoughts on the game and what they think they can improve on as the season continues.

Another player voices his opinion about the loss of the game.

“It was unfortunate, it sucked that we lost.” said senior Jony Munoz, “The first half was kind of bad from the whole team but I think we picked it up. The reffing wasn’t very good but we can’t make any excuses so we’re ready for the next game.”

Head coach Matt Trumpp also talked about the game on Twitter: “Boys drop a tough one to BVW 3-2 in a shootout. Lessons learned.”

Munoz also had some ideas on how the team can further improve throughout the season.

“We have a lot of new players so I think getting to know each other has been a process, it’s taking some time for everyone to be on the same page but I think we will get there very soon,” said Munoz.

The varsity team just played again this past Thursday and took a victory 6-1 against Gardner Edgerton. They have just played their first home game on Tuesday against Shawnee Mission West and won 8-0. They continue to advance in the Sunflower League Tournament with a game on Thursday, Sept. 19 at Olathe District Activities Center at 7 against Olathe North.