The Curtain Closes on Xanadu

Cast and Crew Conclude their Performances with Final Thoughts on Xanadu 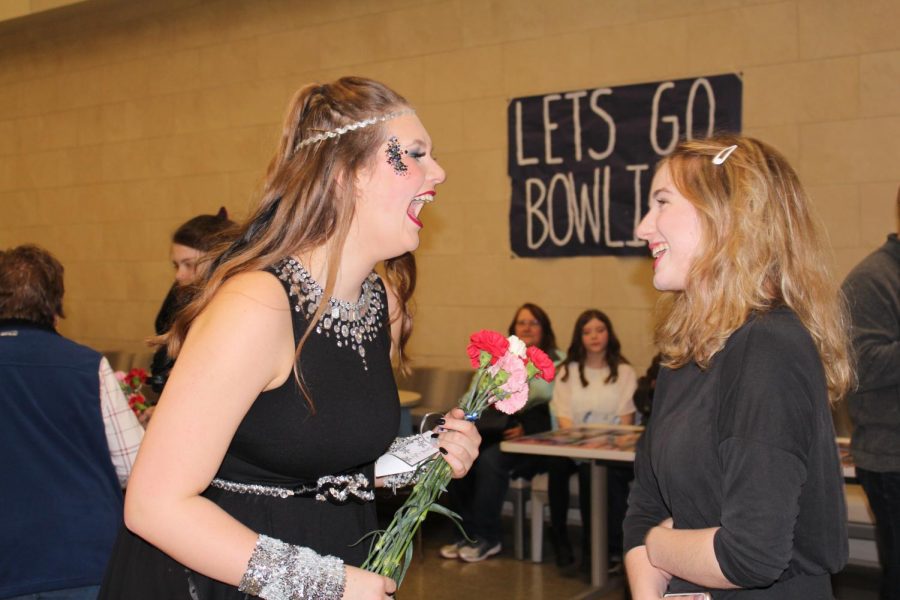 Cast member and senior Peyton Falen laughs with stage manager and junior Summer Sperke, while holding onto a handful of flowers and handwritten notes that the audience members had a chance to write before the show and during intermission.

Friday night, the theatre cast and crew members ran their first big performance of Xanadu, and were extremely proud and eager to do it all over again the next night.

The shows stage manager, junior Summer Sperke, who was in charge of lights and sounds among other things, was especially happy with the lack of technical difficulties they experienced.

“I feel really good about it!” Sperke said. “The show went really well. Usually by this time on Fridays, we’ve had like one sort of mix up, but we didn’t have any. Knock on wood for Saturday.”

Sperke was by far not the only cast or crew member who was happy with how things turned out. Female lead, sophomore Kalista Brown, said it was their best time running the show.

“I was a little scared not going to lie,” Brown said. “But it was super fun. The show went really awesome.”

After the show Friday, it was nearly all smiles. Many families and friends of the cast and crew greeted them with congratulations, hugs and flowers. But for some, Saturday night was a more emotional event.

Saturday night at 7 p.m., the endless effort and hard work displayed by the Xanadu cast and crew came to an end as they performed the show one last time.

For the seniors involved, Xanadu was the last musical performance of their high school career, and senior Peyton Falen, a member of the cast, said she will miss Xanadu more than any other show she ever took part in at Olathe West.

“It has been a very emotional show for me,” Falen said. “There was a special bond between people in this cast and crew, that is unmatched by any other shows I have done.”

She went on to say the process was smooth and easy going, and that everyone got along and enjoyed being around each other.

“This was the biggest show that OW theater has taken on, and it took a lot of man power to pull it all together,” she said. “In the moment it felt like the hard work was constant, but now that it’s over I feel like it went by in the blink of an eye.”