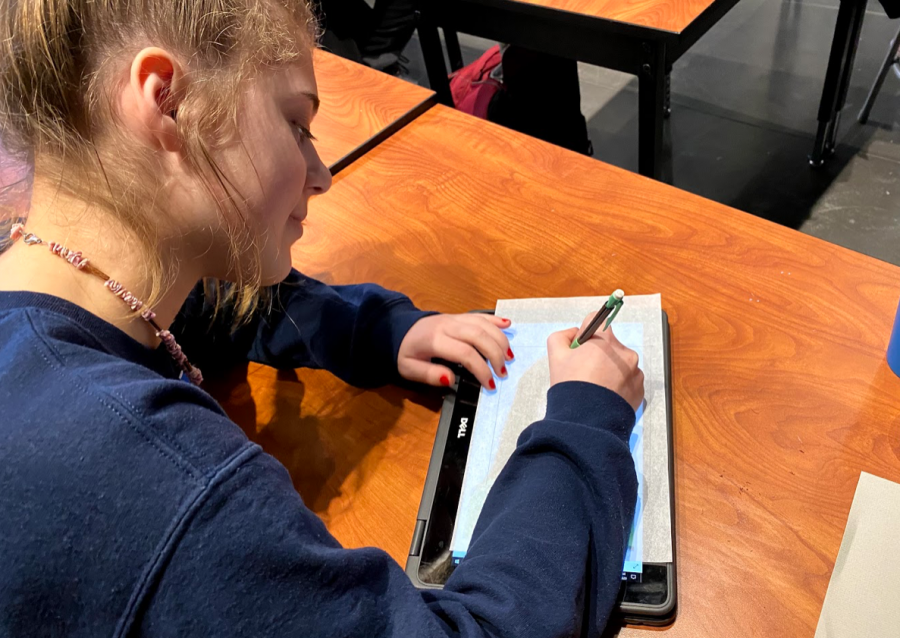 "It’s a nice break in my day to go to an art class and not have to think about anything.” - Ruth Pickens

Art can be seen by some as this grandiose feat where only especially talented people can create it. Others see it as a more relaxed and laid back process that isn’t fancy in the slightest.

“It’s not something that I’m great at, but I enjoy it,” junior Ruth Pickens said when asked about her decision to take art classes. “I think it’s calming. It’s a nice break in my day to go to an art class and not have to think about anything.”

Pickens is currently enrolled in Kelsey LaPorte’s Drawing II class and has been taking art classes such as painting and ceramics since her freshman year.

“I think it’s a really cool form of expression,” Pickens said. “I’m not that advanced of an artist and I’m just better at doing what people tell me to do I think it’s really cool when I can see other people come up with their own creative ideas and draw and paint from that because it’s a cool way to express yourself.”

For others, like LaPorte, art has been something that she has dedicated her entire life to.

“At a very young age, I had such a passion for art,” LaPorte said. “Both my grandparents are artists. And ever since I was young, when they visited us they would always do portraits of us. Then they would teach me their techniques and their ways and for gifts, they would always give us art supplies.”

LaPorte also touched on what sparked her interest in teaching art classes.

“As I got older, I just loved kids,” LaPorte said. “So it was in high school when one of my best friends suggested that I become a teacher so I could mix the two things I love the most together.”

When asked about what art means to her, LaPorte said that it’s a way of expressing herself and opening her mind to creativity.

“To me, it just brings joy to my heart looking at it and doing it,” LaPorte said.

Meaningful art goes beyond just the visual. To sophomore Sam Keleman, music has become a way of expressing himself. Keleman used to create abstract drawings with graphite before he took up music.

“I feel like music is art 2.0,” Keleman said. “With art, you’re showing somebody something to try to convey an emotion, and people only see that as long as they’re interested in it and keep looking at it.”

Keleman described music as being more direct in expressing emotion. He stated that there’s less guessing involved with music and the beats and words can expressing your feelings in a straightforward manner.

“With music, they still might have to figure it out, but it’s more direct and you have the length of the song to convey whatever you’re trying to show them, instead of just where they look at the painting,” Keleman said.

Keleman also talked about art pieces that speak to him and how he believes art influences others.

“Any piece that can show how change is possible means a lot to me,” Keleman said. “If there’s anything that can show people that it’s actually a possibility and makes them believe it too, then that’s meaningful to me.”

Ultimately, art is not an easily definable subject and changes from person to person. It’s up to the person who creates the art to give it meaning and personality.  That’s what makes art, that indescribable human element.

In the words of art teacher LaPorte, “the world wouldn’t be as beautiful without art.”