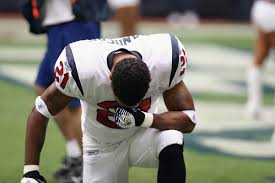 Patriots player kneels before game during national anthem among other teammates.

On Aug. 26 2016, former San Francisco 49er’s player, Colin Kapernick, kneeled during the National anthem to protest racial inequality and the oppression of Black people in America. Kapernick’s protest sparked an entire movement that has caused a stir in not only the NFL but the entire sports community.

Discussions about protests in the NFL have spread across the nation. High School sports have begun discussing how these protests have affected their community as well.

“I think sometimes you have to do things that are a little more provocative, to get attention, and something that needs attention,” Olathe West football coach Greg Morgan said.

Colin Kapernick was able to draw attention when he decided to protest during a NFL game five years ago.

Before Lucas Vincent’s five year coaching career, he played football at the University of Missouri and was later drafted to the NFL.

Vincent spoke on his experiences with inclusiveness at University of Missouri and the NFL.

“I played with people from all sorts of different backgrounds. I have to understand where they come from because we spend so much time together. These are my brothers.” VIncent said. “I’ve been very fortunate to coach with a lot of people who give athletes equal opportunities and don’t really put race as a factor.”

The sports community has made big leaps in the fight for the Black Lives Matter movement by bringing attention to the issue of inequality in our nation, but many believe there is still work to be done.

“I am not going to stand up to show pride in a flag for a country that oppresses Black people and people of color, ” Kapernick said. “To me, this is bigger than football and it would be selfish on my part to look the other way. There are bodies in the street and people getting paid leave and getting away with murder.”