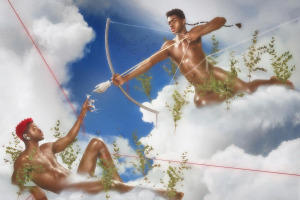 On March 26, pop artist Lil Nas X released a new single “MONTERO (Call Me By Your Name)” and the song quickly reached No. 1 on the charts. Shortly after, the song was abruptly taken off many streaming sites such as Apple Music and Spotify.

“Everybody stream Call Me By Your Name hard today because it may no longer be available tomorrow and there’s nothing I can really do about it,” Lil Nas X said in a tweet on April 13.

The song, along with the music video, features a story about Lil Nas X’s journey of discovering his sexuality which led to criticism from religious groups for its use of biblical imagery and praise from those who look for representation.

“He’s trying to tell a story through a song through a medium that he is specialized in,” junior Autumn Jones said. “…and there’s absolutely no reason to take that off and silence somebody’s voice.”

Since April 17th, the song has been made available again on most streaming platforms, but fans are still left with the question of why the song was taken down in the first place.

“A black, gay creator is making a statement and people decide to silence his voice,” Jones said. “Throughout our history, there’s been no progression without people speaking up for themselves.”

While some praise Lil Nas X for using his platform to speak on his experience as a gay, black man, not all agreed with how the singer went about it. In addition to his song and music video, Lil Nas X also released a shoe for sale that features a pentagram. The shoes have been dubbed the ‘Satan shoe’.

“Why has “oh, but I’m gay” become a default excuse for immorality?” said author Candace Owens in a Tweet on March 29. “It was Kevin Spacey’s line when he was accused of sexual assault. Andrew Gillum’s when he was caught with a hooker and crystal meth. Now it’s the reason Lil Nas X needs to make a Satan shoe with human blood?”

Although the debate still continues on the morality of his new single and promotions, Lil Nas X hopes that fans can take away a positive message.

“…more acceptance, more open-mindedness amongst humanity as a whole,”  Lil Nas X said in an interview with Time Magazine. “I want kids to know that they don’t have to harm themselves—and that they’re capable and worthy.”