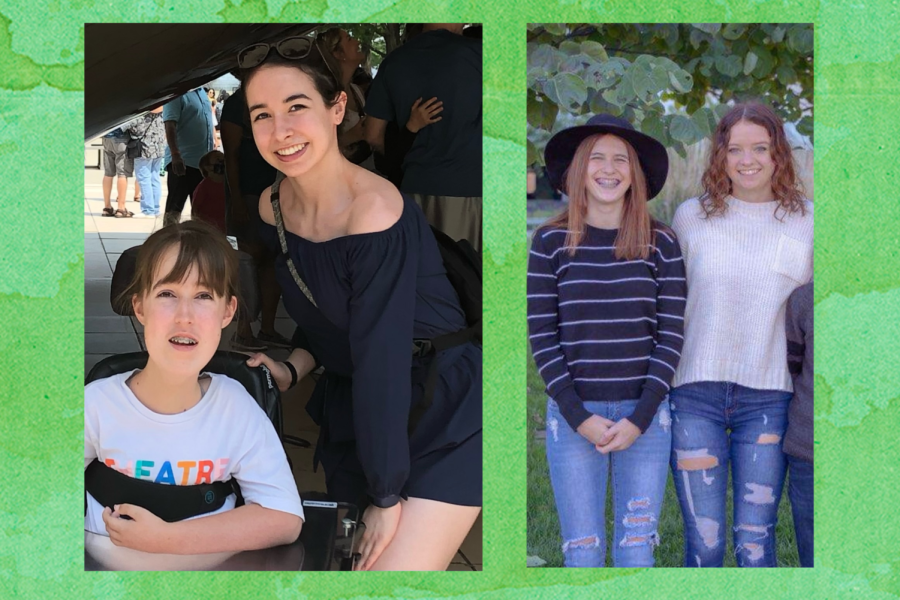 When siblings are together in the same school, some love it, and some don't.

While walking through the halls of your school, you may see familiar faces of friends and classmates. But what is it like to see a familiar face you don’t only see at school, someone you also see at home?

Every person who has a sibling can most likely recall moments when they’ve had to share with their sibling, whether that is toys, clothes, rooms or in some cases, a school.

Many siblings have a relatively close age gap, with the average age gap between siblings in America being about two and a half years.

According to the psychological models of Alfred Adler, age gap along with birth order can affect the relationship between siblings. In many studies conducted, it was found that siblings with a closer age gap didn’t have as good of a relationship than siblings further apart. Adler’s theory was that when a child is still developing a personality and another child is born, it creates rivalry and conflict.

In my case, I am three years apart from one sister, and six from another. I get along better with my sister six years younger than me instead of my sister three years younger. My sister will join West when I am a senior, and I am not as excited as she is.

However, Adler’s theories had exceptions with siblings who had good relationships with a close age gap. And that is how it is with sisters Evelyn and Aubrey May. Evelyn is a senior, while Aubrey is a sophomore.

The two sisters, while close in age, have maintained a good relationship. One of the perks of having an older sibling at your school is getting advice and help for things they have dealt with.

“I think it’s fun to have someone there to see in the hallways,” Aubrey said. “There is some sort of comfort element knowing that she is there if I need any physical or mental support. She also knows a lot about the school so if I have any questions I can ask her.”

Some siblings also have to deal with comparison to each other, with teachers comparing younger siblings to their older siblings they’ve had in the past. Although certain teachers that understand try to avoid comparison between siblings.

“Lyla gets it a lot,” Evelyn said, referring to their youngest sister who is an incoming freshman. “Everyone is always like ‘Oh how are your sisters? Tell them hi.’”

To certain siblings, they don’t mind sharing a school, they may even like it. But it isn’t for everyone.

“I think it’s a good experience,” Aubrey said. “But I can definitely understand why people don’t want their siblings in their school.”

Sophomore Kaylee Thompson has a different perspective on the issue. Her younger sister Macy is joining West in the fall through the Public Safety 21st Century Program, the same program Kaylee is a part of.

“I was not happy,” Thompson said. “It’s going to be a very awkward situation having my sister here.”

Thompson transferred to West through the Public Safety program this year, and so far has enjoyed the school. In addition to her sister joining her next year, she also has to take her to and from school each day.

Kaylee and Macy don’t have the exact same relationship as Evelyn and Aubrey, making their perspectives different.

“And having to drive her everyday at 7:30 in the morning,” Thompson said. “If she is not ready, she will be left.”

As many know, if you aren’t out of the parking lot quickly, you could get stuck for quite some time with the crowd of students. Many students that take their younger siblings have learned that.

Imagine having to wait for your sibling to get outside and to the car, just to get stuck in the traffic for 20 minutes when you were ready to go.

“I feel like it’s a good environment for her to be in,” Thompson said, referring to Public Safety. “But at the same time it’s going to be awkward. She could say anything about me to my teacher and try to get me in trouble for stuff that isn’t true.”

Thompson feels conflicted about her sister joining her at West, as some students do.

“I’m mad about it,” Thompson said. “But I also feel like it’s a better environment for her than Northwest or East.”

Like many parents, her parents had told her she needed to accept it and couldn’t change their decisions. However she is willing to look on the bright side and try out her new normal.

Obviously, you can’t just tell your parents, ‘You should’ve waited an extra year before having my sibling.’ Sharing a school with your sibling depends on the relationships, and what students need to understand is that is how it goes for many of their fellow classmates.

However, what parents need to understand is that their children are allowed to be less than thrilled to be at school with their siblings, especially if they don’t get along particularly well.

Sharing a school with your sibling can go many ways. So the answer to the question ‘Should siblings share a school?’ boils down to this. It is different for everyone and unique to each sibling relationship, and sharing a school can either be a dreaded situation, or a great experience.