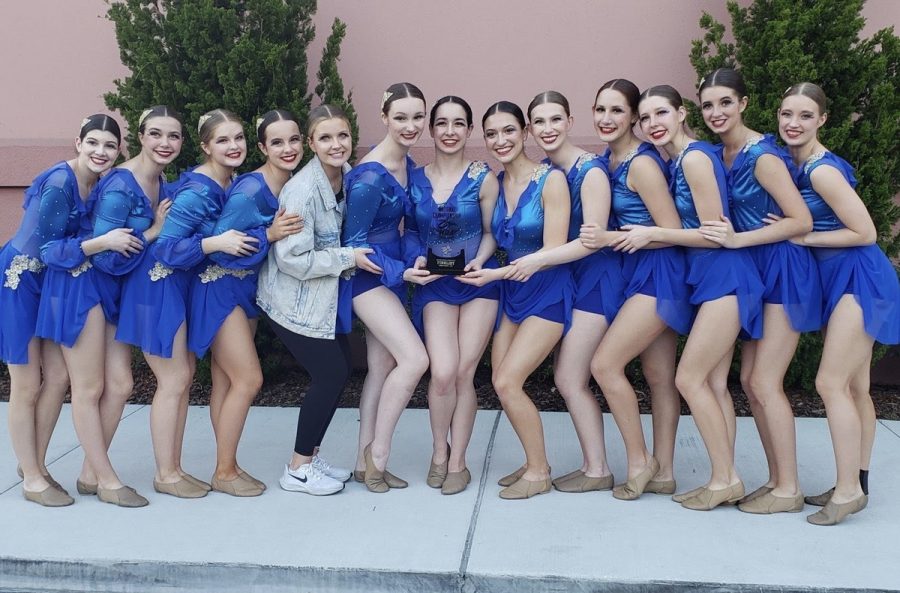 After the team flew into Orlando, they spent most of their time practicing their routines so they would be perfected by the time they stepped on the floor. The team practiced every chance they got and even held practices outside their hotel.

Though the team spent lots of time working on their routines, they did have time for other events and team bonding. Junior member Gabby Ledou was glad the team had time to hangout away from the dance floor.

“We had some pool days,” Ledou said. “We also got to go to Universal the last day, so it was a lot of fun, and I really bonded with the team in my hotel room.”

At a normal dance competition in Kansas dance teams perform on a gym floor, but at Nationals, teams dance on a marley floor and perform on a real stage. Senior Evelyn May was impressed by the competition’s venue and setup.

“The stage had quite an elaborate setup,” May said. “There were lights and the background was computerized, so it was a very big deal.”

After taking in the venue and getting their makeup and hair done, the team was ready to step on the stage.

“The stage was huge and the lights were so bright,” Ledou said. “Then stepping on the stage and hearing everyone cheer for you just made us feel like we made it.”

After all the teams finished dancing, the results for finals would be out. Lefou said the team was ecstatic when they were told their jazz dance was advancing on to finals.

“My favorite part of the trip was definitely finding out we made it into finals,” Ledou said. “We were all really unsure and then we found out we made it and we were all so surprised. It really made me feel like everything was worth it.”

Making finals meant the team got to recompete their jazz dance. The team finished with a 89/100 in overalls which was a three point improvement from their preliminary score. May said the team loved watching all of the other teams perform and getting  to dance on the nationals stage.