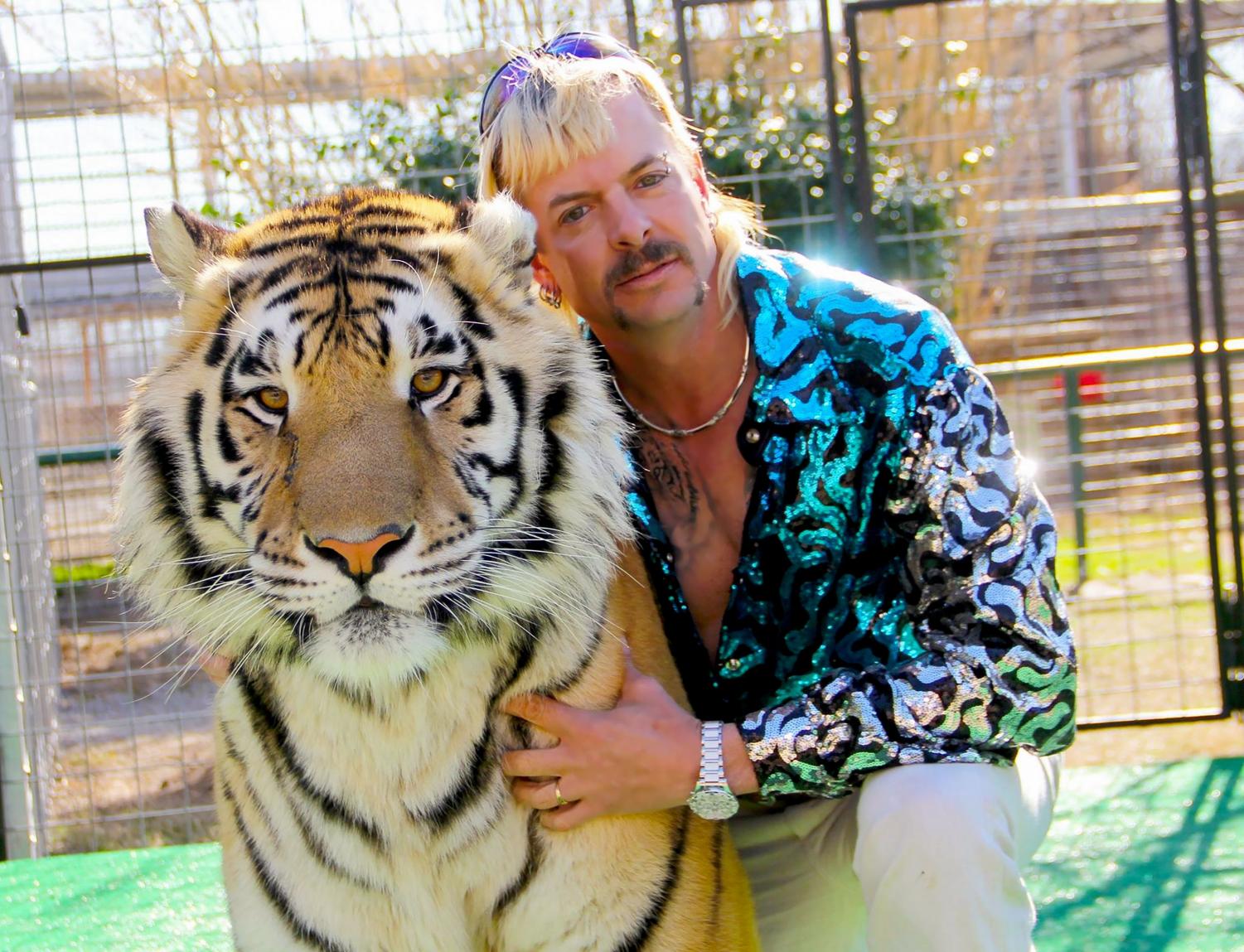 During the coronavirus quarantine, many have turned to Netflix for entertainment. One of the most popular shows to capture viewers attention has been “Tiger King.”

“Tiger King” is a Lot of Fun

During this time locked up in quarantine, we’re all looking for all sorts of ways to pass what seems like an unlimited amount of time. Lucky for us, Netflix blessed us with one of the most entertaining documentaries that I have ever seen.

The story of Joe Exotic (AKA the Tiger King) and his downfall is Shakespearean and dramatic, while his antics and behavior is absurd and often wildly amusing. “Tiger King” is one of the most enjoyable viewing experiences one could have in their entire life.

The reason that “Tiger King” is so entertaining is that they present you with character after character who lead unfathomably crazy lifestyles. Joe Exotic is an extremely flamboyant, yet intensely bitter, polygamist zookeeper who seduces straight men using methamphetamine. Doc Antle uses his zoo to groom young women and has accumulated three wives through the process. Carole Baskin runs a zoo without paying her employees, may have murdered her ex-husband and her new one could largely be described as obedient. This is honestly just the tip of the iceberg when it comes to the people “Tiger King” presents to you.

The main criticism I’ve heard against “Tiger King” is that they left out a great deal of misconduct that Joe engaged in throughout his career of running the zoo. While I do understand how one could walk away with that impression, Rick Kirkham, the man who was going to produce his reality show, goes into great detail in the after-show about all of Joe’s wrongdoings that he witnessed in his years at the park. So, it’s not like the producers turned a blind eye to this like it wasn’t a big deal. The reality is, Joe’s frequent use of the n-word just didn’t really play an important part in the story of his downfall, so the filmmakers felt like they probably didn’t need to include it.

While Joe Exotic is technically the protagonist, he’s also portrayed as the deeply flawed person that he is. You may find yourself rooting for him, but chances are you probably won’t walk away from your television believing that he’s a great guy. I mean he talked about his ex-husband Travis’s genitals at his funeral, in front of Travis’s mom. He’s portrayed as ludicrously selfish, insecure, delusional and often machiavellian, but he also got scammed by people he thought would help him and I think we root for him because we have a soft spot for that.

If you’re judging “Tiger King” as if it was a biography about Joe Exotic, sure, it falls short. But what it really is is a story about a complex power struggle in a fringe subculture that not many of us knew anything about before these documentaries.

I love fringe people because it’s so easy to live a life where all you come across is people with normal interests, normal beliefs, and normal lifestyles. It’s a fun change of pace to take in content from someone who has a pig tattooed on their forehead every now and then. That’s why Joe Exotic makes such great television; he’s about as fringe as they come, yet he’s wildly outspoken and hungry for the limelight. John Oliver saw it when he included him in “Last Week Tonight”’s piece about third-party Presidential candidates in 2016. Rick Kirkham saw it when he went to film a whole lost reality series on Joe. And finally, Netflix saw it when they produced this wildly popular documentary about him. Joe Exotic makes for good TV.

Tiger King is Exciting, But Not Honest or Humane

*This article will have spoilers for the “Tiger King” plotline.

Documentaries aren’t anything new to today’s average viewer, but the national response to “Tiger King” surely is.

Being locked in quarantine has had effects on many, including me. Sleep schedules are non-existent, Walmart has suddenly become a mad fight for boxes of ramen, and people are choosing between staring out their window or watching Netflix. Needless to say, Netflix is making a large amount of money. After all, who would look outside when they could watch a gay, republican, polyamorous, tiger-owning man from Oklahoma attempt to run for governor and gain nearly 20% of the votes? Not me, that’s for sure.

That’s why I simply had to sit down and for two nights and watch seven episodes of what The New Yorker called “prestige trash”.

Now, there is some credit that should be given to “Tiger King.” The bravery of the creators to follow people that were potentially dangerous and dealing with wild animals is commendable, and the filmmakers deserve credit for their labor. Additionally, the insight into the life of Joe Exotic, the ‘Tiger King,’ is extremely entertaining. Its ups and downs are riveting, and the ongoing plot of the documentary is sure to keep the viewer interested in the life of Joe Exotic.

However, that’s where the issue lies, because life isn’t always riveting and interesting. When that becomes the case, it’s clear to see points of flawed editing or even revisions from the ‘Tiger King’ himself.

For example, the presentation of Carole Baskin killing her husband. I myself am questioning the debate still, as nothing is certain. I do not denounce the possibility of this murder, nor do I believe in it wholeheartedly. What I do believe in is the basic facts, of which, in “Tiger King,” there is none.

There has been proof of the supposed murder presented outside of the documentary, but within the documentary, it is nearly bare. Taking out all the padding, opinions, and slow-motion shots of Baskin on her bicycle, there are few facts leading to Baskin killing her husband. First, he disappeared, second, they weren’t happy together, and third, she owned tigers. However, the emotional evidence was enough to have many convinced that Carole Baskin killed her husband.

In fact, Carole Baskin has received multiple death threats because of this very issue. According to the New York Post, Baskin has had to shut off her phone, stay indoors, and completely eliminate communication with anyone. As floods of death threats come in, about 30 people loiter around the sanctuary, and drones fly overhead. Strangers “have begun filming and screaming at her.” She fears her workers’, her own, and ironically her current husband’s safety.

The attention that Joe Exotic and many others receive in this documentary only results negatively upon their actions. It was even seen in the show that Joe was willing to fire people just for the drama of it. With the splash of the show, it should be becoming more apparent that the people in this story don’t deserve our attention–because they thrive off of it.

This cannot be said about everyone, of course. Many workers truly cared about these big cats. Some even went further with their claims against him in the aftershow, but no difference has been made. Most people completely overlooked what should be the focal point of the show.

“I finally moved my two chimpanzees last week,” said Exotic, morosely in the last episode. “Probably one of the hardest days of my life. They sat in cages next to each other for over ten years… and in two days they were out in a big yard hugging on each other. Did I deprive them of that for 10 years? Yeah.”

“Tiger King” is entertaining and fun in the same way an episode of “Keeping Up With the Kardashians” is. It’s the fires, the murders, the hate, the threats, the overall phony extravagance that makes viewers click the magic button- ‘Next Episode’.

There were few benefits to the release of “Tiger King.” First, more attention was drawn to the seedy underbelly of exotic animal profiting, though it was quickly overshadowed by ready-made dramatic stings. Second, people at home had something to yell at and cheer for when their March Madness was canceled, though it preferably wouldn’t put multiple in danger after the fact.

So what little thing can the average viewer take away from the show, if not the possible Baskin murder claims or the stupidity of 20% of Oklahoman voters? The fact that in the same way we got obsessed in the personal drama of Joe vs Carole, many people even today get engrossed in owning wild animals.

“I deprived them of being chimpanzees,” said Joe. ”Did I do it on purpose? No… I was wrapped up in having a zoo.”