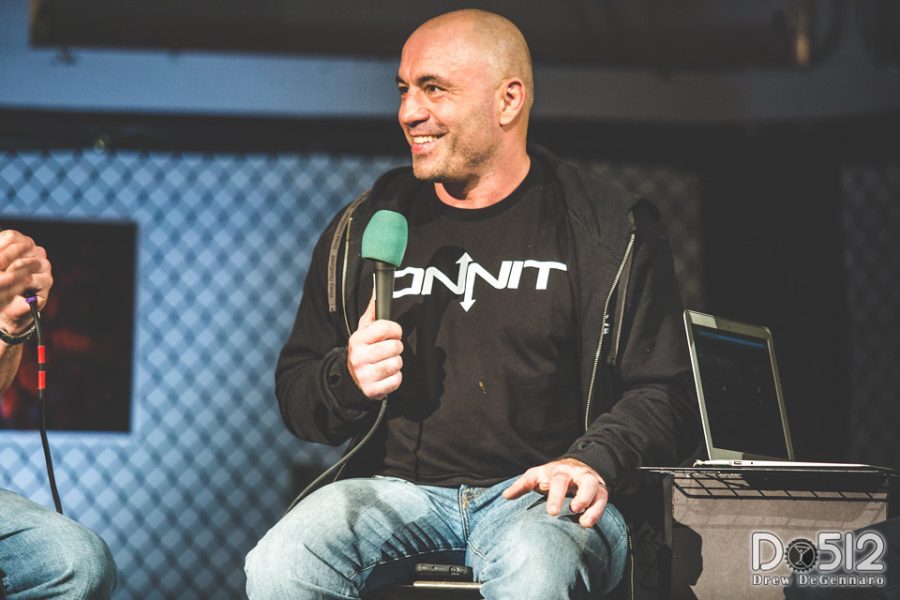 In May of 2020, popular podcast host Joe Rogan signed a deal with Spotify, securing his spot on the popular streaming service. Recently he has made headlines with his controversial comments on COVID-19 related topics which has led viewers to question his spot on Spotify.

Whether he’s podcasting with public figures such as Elon Musk or Ben Shapiro, or posting obscure content on social media, it is no question that Joe Rogan is one of the most influential media presences of our age. What kind of influence that is, is up to you.

Recently Rogan has been slammed for his comments surrounding COVID-19. He has promoted ivermectin, a “treatment” for COVID-19 that has little evidence to it being an actual treatment. “This doctor was saying ivermectin is 99 percent effective in treating Covid, but you don’t hear about it because you can’t fund vaccines when it’s an effective treatment,” Rogan said in one of his podcast episodes. The medication is known to cause dizziness and uncontrollable vomiting when ingested according to the FDA.

The podcaster has also been known to spread misinformation about the effects of the COVID-19 vaccination saying, “The myocarditis risk is higher from vaccines than from COVID.”  Myocarditis, heart muscle inflammation, has been known to occur in a few vaccine recipients but nothing compared to the cases caused by COVID-19. I think Rogan needs to take a step back and leave the medical advice to the professionals.

When he’s not spreading false claims about COVID-19 Rogan is hopping on Instagram to “apologize” for his various use of the n-word.

“For a long time when I would bring that word up, like if it would come up in conversation, instead of saying ‘the N-word’ I would just say the word. I thought as long as it was in context, people would understand what I was doing,” Rogan said in his apology.

But why would context matter if you’re a white man using a racial slur? I think he should have just never said the word in the first place. He can’t plead juvenile ignorance either. Rogan is 54 years old, he should know the difference between slang and racial slurs.

Throughout his apology I went through different phases of believing he was sincere and then he would say another thing that would make me remember what got him here in the first place. No one likes an apology that goes,”I am sorry but…” and Rogan presented a lot of that in his Instagram post.

While I have a negative impression of Rogan from news headlines about COVID misinformation or making a distorted public apology for saying racial slurs, I can also say his podcasts are just in general not very good. His video covers are full of extravagant click-bait and delusive titles such as, “The Biden Administration Has Delayed Release of JFK Document,” accompanied by another video titled, “Why Does Chris Pratt Get So Much Online Hate?” that draws in a demographic of viewers into his world of misogyny and bigotry that comes along with his podcasts.

His show is simply him and his buddies (and occasionally guest stars) getting high, making fun of people, and saying uneducated opinions on real-world issues. The show is raunchy and ignorantly put together. As NPR describes it, “Bigotry Denial Syndrome” is what Rogan is suffering from and I think it is time “The Joe Rogan Experience ” becomes a thing of the past.

The former television presenter is 54 years old, yet he reminds me of a young teenager who has yet to learn the difference between good and bad. Immaturely, Rogan constantly misuses his platform by spreading misinformation and hate, but Spotify still continues to give Rogan an audience. This has even led popular music artists such as Joni Mitchell and Neil Young to remove their music content from the site which has left fans angry with the streaming service. However, Spotify has made the steps to remove Rogan’s content that involves him saying n-word slurs which is a small, but positive step for reconciliation for the music platform.

While I hope to think that Joe Rogan does what he does purely to bring entertainment to the masses, I can’t help but wonder if that is just his true innate ignorance showing. The man needs a reality check and a good lesson on “thinking before speaking.” I believe after 1,770 podcast episodes and 13 years of content creation, it is time that Rogan retires his online presence and learns how to have opinions without posting them online.

Have we gotten to the point where people need to be “protected” from someone’s opinions?

To form an accurate opinion piece over the controversial podcast called, “The Joe Rogan Experience”, I listened in good lengths to a few of his episodes. After listening to those podcasts, ones controversial and ones not, I have come to a stable conclusion.

Joe Rogan, former wrestler, stand up comedian, UFC commentator and now podcast host, firstly came off to me as an extremely intelligent individual.

Another thing I noticed when browsing the podcasts, is that all his guests are different. They vary from political parties, authors, psychologists, mainly people with interesting stories and opinions.

Something those who don’t actually listen to the podcast don’t know, is that Rogan is actually not a republican. Many assume that he is, when in reality he is not affiliated to one party or the other. This is also shown with his variety of guests.

Someone had posted a compilation of Rogan saying the n-word, without showing the conversation or what he was quoting. When listening to the podcasts, it is shown in a whole different light than the misleading video. While it still isn’t necessarily excusable, it shows Rogan as someone who frequently uses the word as if it has no impact. When I saw what everyone was saying on social media, I had made similar assumptions. If you actually listen to the podcasts and do research on those conversations, it is shown differently than the video.

Rogan even publicly apologized for the use of the word, saying it was, “the most regretful and shameful thing I’ve ever had to talk about publicly,” also adding that he had not used the word in years, “There’s no context where a white person is ever allowed to say that word.” Rogan continued in his video posted on his instagram.

Many forget that Rogan isn’t the first celebrity to use the word, and many of those instances have been ignored. President Joe Biden, then senator, had read a part of a memo that contained racial slurs that had been used by a Louisiana legislator. “We already have a n—– mayor, we don’t need any more n—- big shots.” Biden said. Was Biden quoting someone? Yes. But Rogan said no matter the context. The point is, other celebrities like Biden and even Obama, including Kanye West when giving white attendees “permission” to use the word in his hit song “Gold Digger”, definitely did not get this much attention.

Explain to me how we are able to overlook these situations, but try to kick someone’s podcast off Spotify for them doing the same thing when they apologized? Yes, Rogan using the word was wrong. But he apologized, and understood how it was wrong. His apology video was sincere, and after watching it I truly believed he knows what he did wrong.

Spotify artists such as Joni Mitchell and Neil Young have removed their music from Spotify in protest, and Rogan has even addressed the issue in his video on instagram, saying he had no hard feelings toward them and saying he is happy to put a disclaimer on his podcast.

The second big issue against Rogan is his COVID statements. Rogan had a guest star, Dr. Robert Malone, who was involved in the making of the mRNA vaccine. His statement that became very controversial, was only his opinion.

Malone had said he wasn’t against all vaccines, and he was only concerned that certain precautions with normal vaccines hadn’t been taken with mRNA vaccines for COVID. He also stated that in his opinion, he didn’t think people should be required to take the vaccine. How is stating your opinion labeled as mis-information?

Malone’s opinions had not come off as harmful or as mis-information. Given the fact that many statements were made by Malone, and not Rogan himself, it definitely shouldn’t have caused the big explosion of aggression against Rogan.

When it comes to The Joe Rogan Experience, while it isn’t for some people, it definitely should not be taken off of Spotify. I was interested in his topics and ideas, and if some try to take him off of Spotify and try to censor his opinions, it isn’t going to do anything. That won’t stop Rogan, and that’s just proving that we’ve gotten to the point where people will censor anyone with opinions they don’t agree with. After all, as CEO of YSC Consulting Eric Pliner said, “Spotify is saying they don’t believe in silencing someone who expresses a different point of view.”